Valid Inference
No doubt, the student has noted the numerous references to valid inference or valid argument form. The former will receive attention forthwith; the latter is reserved for the next chapter, since its explication falls within the scope of mediated inference. But first, a reminder about the use of the word form, for it has more than one meaning. The primary meaning of this word is in reference to the four standard propositions: A, E, I, and O. When speaking about the form of an argument, the student can take it to mean the "bare bones" of an argument, so to speak; or, its outline or skeleton. More definitive language about the form of an argument must be postponed until Chapter Four.

Now for a very important definition borrowed from Gordon H. Clark:
Chart 2.1 below shows how many times a form can be true. Five sets of circles correspond to five ways in which two terms (subject and predicate terms) can be related in the four forms. The circles are numbered as cases 1 through 5 for easy reference.
There are five possibilities, 2 Terms Related in 5 Ways.

Chart 2.1: Euler Circles
To repeat. An inference is valid if the form of the conclusion is true every time the forms of the premises are. In other words, a valid inference from premises to conclusion depends on the arrangement of the subject and predicate being true in the conclusion, every time the arrangement of the same subject and predicate is true in the premises.

Recall that under discussion is the nature of Immediate Inference. Chart 3.1 and the discussion following may challenge the student; however, it is essential that one have a thorough understanding of what is meant by immediate inference. 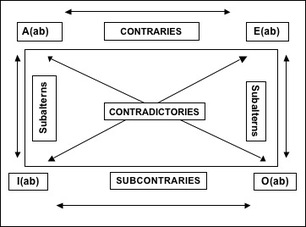 Chart 2.2 Square of Opposition
The four relationships are contraries, subcontraries, subalternation, and contradiction. Definitions follow in the order listed with examples.

Subcontraries
The forms, I(ab) and O(ab), are subcontraries, meaning that they cannot both be false together, but they could both be true. Referring again to Chart 2.1, the lines I and O exhaust all 5 cases, and overlap each other to show that they can both be true together -- as in, Some Christians are Calvinists, and Some Christians are not Calvinists.

Subalternations
Subalterns are two forms that are both true together or both false together. There are two pairs of subalterns: (1) A(ab) & I(ab); and (2) E(ab) & O(ab). The Chart shows that lines A and I are both true under cases 1 and 2, and both false in Case 5. In Case 5, if it is true that No men are angels, then the corresponding A and I are both false. A similar analysis applies to the second pair of subalterns. If, All men are sinners, then the corresponding E and O forms are both false.

Invalid Inferences
We have shown the value of Chart 2.1 in testing the validity of the immediate inferences depicted in the Square of Opposition. Obviously, use of the same methods proves invalidity as well, for if a logical implication is not valid, then it must be invalid -- the only other possibility.

Consider the following list of expressions. The list is the number of ways two forms can be combined to form logical implications. The purpose here is to again make use of our charts, in particular Chart 3.1. Using “<” for “logically implies” which of the inferences does the chart show invalidity?  For example, the first implication in Table 3.1 First Figure is A(ab) < E(ab).  It can be read as a conditional posed as a question:
Chart 2.1: Clark Diagram:  5 Possibilities, 2 Terms Related in 5 Ways 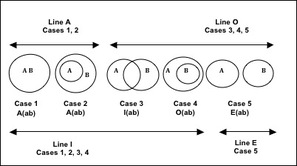 Another example: the last inference in Table21, O(ab) < I(ab), is invalid, since I(ab) is true four times (Cases 1, 2, 3, and 4), while O(ab) is true three times (Cases 3, 4, and 5), and for a valid inference the form of the conclusion must be true every time the form of the premise is true. Practice using the chart is essential; therefore, 1.2 through 1.7 should receive similar treatment as shown with the first and last.

Reflexive
The reflexive relationship is one that holds between one of its objects and the object itself. In logic, implication is reflexive because every proposition implies itself. Note, however, that while A(ab) logically implies I(ab), it is not the case that I(ab) logically implies A(ab). Each form implies itself. Thus, 1 = 1 in arithmetic is reflexive; "is greater than" and "is less than" are not reflexive.

Symmetrical
Symmetrical relationships are those which hold for a and b, and also for b and a. If a is the cousin of b, does it follow that b is the cousin of a? Obviously! But, do you see that symmetry is not present if a is the sister of b? (Assume b is male.) What can be said of "is the twin of?" Is it symmetrical? Logical Implication is not symmetrical, with the exception of the Law of Identity – every proposition implies itself.

Transitive
Transitive relationships are a bit more complicated to explain but easier to illustrate. The relationships "is less than," "is greater than," "is subsequent to," "is parallel to," link together three terms in a unique fashion. If a is greater than b, and b is greater than c, then it follows necessarily that a is greater than c. The relationship "is the brother of" is not transitive. Logical implication is transitive: if a logically implies b, and b logically implies c, then a logically implies c. The basic principle should be obvious: a relation is transitive when it holds for two things, a and b, and it also holds for b and c, then it also holds between a and c.
Summary
The wealth of immediate inferences available from a set of four standard form propositions may come as a surprise to a beginner. As has been shown, knowledge of the definitions of immediate inferences when applied correctly will distinguish valid from invalid inferences. Here’s another example.

What valid inferences (necessary consequences) follow from "There is therefore now no condemnation to them which are in Christ Jesus, who walk not after the flesh, but after the Spirit," reworded so that the sense of the A form is clear? All persons-who-are-in-Christ Jesus-who-walk-not-after-the-flesh-but-after-the-Spirit are persons-for-whom-there-is-now-no-condemnation. The related I form is true by subalternation; the E form is false by contraries; the contradictory O form is false.

Perhaps enough information has been presented in this chapter to show the beginner the impressive power of the logic of immediate inference. We turn in the next chapter to the power of mediated logic, the syllogism.

Click Button for Exercises
Exercise 2
This site contains copyright materials. Permission is granted to print and distribute the Studies provided that each reprint bears the copyright notice, author's name, and source, and provided that all such reproductions are distributed to the public without charge. The Studies may not be sold or issued in book form, CD-ROM form, disk form, or microfiche. Copyright ©Elihu Carranza, 1999, Napa, CA